Chicago O’Hare International Airport is one of the world’s busiest airports. It can be an intimidating place. But there are some surprisingly cool things about it. Starting with the toilets.

Chicago’s O’Hare Airport regularly trades the title of “Busiest Airport in the United States” with Atlanta’s Hartsfield Jackson Airport. But whether it is the busiest or the second busiest doesn’t really matter when you’re trying to navigate your way to your gate, especially with kids in tow. It can be overwhelming.

It’s my home airport, so I have spent plenty of time there, with and without kids. These days, it’s a much more welcoming place, complete with terrific Chicago-sourced food options, fun ways to entertain kids, great shopping (that won’t break the family vacation budget) and more.

Here are 10 things you probably didn’t know about O’Hare Airport.

Flying with kids can be a challenge. It’s getting easier, partly because TSA no longer requires kids under 12 to take off their shoes and partly because airports now get that kids just wanna have fun (and traveling parents need help).

At O’Hare, a terrific kids play area is located in Terminal 2 — so it’s easy to access whether you’re flying American Airlines (Terminal 3) or United Airlines (Terminal 1). Those are the two major carriers that count this Illinois airport among their major hubs. That means lots of flights connect through O’Hare. And that means lots of families find themselves stuck there with time to kill.

My kids (and I) love the Family Lounge. My kids played there until they were in middle school and were too embarrassed to do it any longer. The Family Lounge has toys, climbing structures, funhouse mirrors (that make for fun family photo ops!) and even airport-themed video games.

For parents, there is plenty of seating and charging stations as well as a stroller parking area.

The Family Lounge is closed due to Covid-19, but the Chicago Department of Aviation, which manages O’Hare, says it has plans to have live entertainment at various times throughout the year, especially during the holiday season.

The airport has seven Mother’s Rooms for nursing moms. The rooms offer a private space for breastfeeding babies or pumping. The rooms have comfortable seating, a sink and wash area.

The Mother’s Rooms are located in:

Multi-Modal Facility: 2 Locations on Level 1 – North and South Side
Terminal 1: B Concourse | Gate B10
Terminal 2: F Concourse, Crossover Between Gates E5 and F9
Terminal 3: Rotunda, next to the Yoga Room and Urban Garden (more on those in a minute)
Terminal 3: Concourse L | Gate L6
Terminal 5: Concourse G | Gate M14

O’Hare Can Be Pretty

While most of the airport is crowded and utilitarian, there are some surprising touches, including impressive artwork created by apprentice artists in the City of Chicago’s After School Matters program. Murals, artwork from the city’s cultural institutions and decorated benches are just some of the pieces of artwork at O’Hare.

But the big draw for dino-loving kids is the four-story-high 72-foot-long skeleton model of a Brachiosaurus. Find it in the United Terminal, Terminal 1, Concourse B, just after you pass through TSA. It’s a model of a dinosaur excavated in 1900 by Elmer Riggs, a paleontologist at Chicago’s Field Museum, which is most famous as the home of Sue, the T-rex.

Chicago’s other airport, Midway International Airport, the hub for Southwest Airlines, has even more great artwork. I once nearly missed a flight there because I had gotten so engrossed in looking at the art!

It’s Easy to Get to O’Hare from Downtown Chicago

The CTA’s Blue Line whisks you from downtown Chicago to O’Hare for $2.25 per person in less than an hour. And what kid doesn’t love riding a train? It starts the vacation excitement the minute you walk out the door.

Bonus points for parents when the subway goes above ground in the middle of the Kennedy Expressway. You can smile to yourself as your train speeds past the ocean of cars sitting in traffic, their drivers white-knuckling the wheel as they creep forward.

SheBuysTravel Tip: You’ll need to buy a CTA Ventra card from a kiosk. It takes credit cards. Just buy one card and put enough money on the card to get everyone on the train. You can pass the card from person to person. You’ll only have to pay one card fee and you’ll only have one card to keep track of, rather than one for every person in your family.

Why O’Hare’s Airport Code is ORD

The northwest side location chosen for the new Chicago airport in 1945 was Orchard Field, hence the ORD airport code. It was renamed O’Hare four years later to honor World War II naval aviator Edward “Butch” O’Hare. The name didn’t stick, but the airport code did.

Fun fact: Between 1932 and 1961, Chicago’s Midway Airport, located on Chicago’s Southwest Side, was the world’s busiest airport. But that airport is landlocked by the City of Chicago and its runways were too short for the new, bigger aircraft.

Read More: 3 Things to Love About O’Hare International Airport and 1 Not So Much

O’Hare Can be Relaxing

OK, that might be a stretch even without coronavirus concerns, what with the stress of crowds, long check-in lines, flight cancellations and other travel challenges. But the airport is trying.

The Mezzanine Level of Terminal 3 Rotunda is the place to go. That’s where you’ll find the Yoga Room and the Urban Garden.

O’Hare’s 15 x 16-foot Yoga Room has a sustainable bamboo wood floor, floor to ceiling mirrors on one wall and exercise mats. There’s a monitor showing yoga poses and nature scenes. Another (the less namaste one) just outside the room displays flight information s you don’t get so relaxed that your miss your flight. (The Yoga Room is closed due to the pandemic.)

The Urban Garden, started in 2011, is the first aeroponic garden in an airport in the world. Take the kids to visit the garden and learn more about aeroponic farming — the art of growing plants without soil. The plants grow in a nutrient solution. There are 26 towers with more than 1,100 planting spots. It’s a self-sustaining process that doesn’t waste water and requires no fertilizers or chemicals.

Tortas Frontera, Wicker Park Sushi, Wolfgang Puck and Tuscany Cafe are among the O’Hare restaurants that use the Urban Garden’s produce in the meals they prepare for passengers. The garden grows a wide variety of produce, from herbs to lettuce to vegetables.

Like most airports, O’Hare’s corridors are lined with restaurants and shops. I always figured the stores would gouge desperate travelers. Turns out I was wrong.

Few years ago, the wheel on my favorite roll-aboard suitcase broke just after I cleared security. I reluctantly approached the nearby Brookstone store. I was surprised to find it sold my favorite hard-sided suitcase for just about what I had paid for the one that broke. No big airport mark-up.

So I grabbed a new suitcase, plopped down my credit card and found a quiet corner where I could surreptitiously transfer my unmentionables from the broken bag to the shiny new one.

O’Hare Dresses Up for the Holidays

I love walking through O’Hare Airport at the holidays! There’s a lot more bustle, but there’s also a lot of holiday joy — Christmas wreaths hung at the gates, trees decorated for the season, giant ornaments, red bows and boughs strung across the wide hallways.

Even the passengers seem a little lighter and brighter as the holidays as they rush to catch a flight home to their loved ones.

There’s a piano near Bubbles Wine Bar that (in a non-Covid world) is available for anyone who wants to play it. I was once rushing by to catch a flight when I heard such beautiful music that I had to stop. I stood near a cashier at the shop next door; we both were mesmerized.

The man played on, gathering a crowd. I asked the cashier if she often hears impromptu playing of that caliber. Yes, she said. At least two or three times a week.

When the man finished, I approached to find out more about him. Turns out he is a concert pianist. He was on his way to his sister’s wedding, but his flight was delayed. Lucky for me.

The toilets have these special seats with a plastic covering. You wave your hand over the little green light and it unrolls a new seat covering. No more pulling out those wispy paper things that never really cover the seat anyway and do nothing to protect your hiney from the drips left behind by the previous occupant. (I know. Ewww.)

And, in case the whole process seems a little challenging, there’s a handy-dandy instruction manual pasted on the latrine wall, with the directions in both pictures and words.

If you’re traveling with a potty training toddler, you’ll wish you could find one of these toilets everywhere you go! 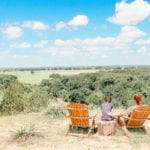