Take your heart to Nepal, not your Western instincts. Religion is vibrant, living on street corners and in urban parks, on hiking trails and in temples and pathways outside them. Listen differently to more fully experience religion in Nepal – that‘s the advice this SheBuysTravel received, and applied.

Normal in Nepal is not the normal of my life half a world away in America. Differences are reason enough to travel to the “top of the world.” That’s what I was seeking, the not normal.

Tibet is really the top, and Bhutan is next door in these Himalayan mountains. India and China are much too big to think about when traveling to absorb religion.

Nepal is complicated, relevant, calm and startling all at the same time.

Prayers always float by, launched into the winds with triangle-shaped flags in vibrant colors, strung overhead in long lines — but not so high as to overlook them.

Sometimes prayer flag fabrics are tattered and faded, as if the concerns behind them were long ago resolved.

The wind horse carries these prayers, directly from their red, white, green, blue and yellow triangles.

The prayer flag five colors never vary. There’s a reason because to the people of Nepal numbers and colors matter. They represent the five vital elements:

Looking down I also found religion in Nepal. Sidewalk worship is spontaneous, and plentiful in Kathmandu and throughout this tiny nation.

Simple altars pop up on street corners, a stack of stones, smudged with the red powder seen on many foreheads, the touch of a blessing.

How grateful I was learning from my Buddhist guide that I‘d be respectful if I, too, touched this little worship space. And with the ones holding a bell, even better! The sound of ringing provides music to the gods.

The Buddha is always guiding.

Some days I thought I was admiring a robust farmer’s market or a big picnic with people sitting in the lotus position, or squatting, on fabrics spread in public spaces.

Turns out it was Monday morning family worship! The Budanilakantha Temple is an outdoor expression with prayer wheels to spin, bells to ring, yak candles to light and prayers to exchange with holy persons.

Vishnu was here, a massive god in the reclining position. Hindus consider him the preserver and protector of the universe who restores the balance of good and evil.

So far, Vishnu has been incarnated nine times. This revered version of him, reclining on twisted coils of a cosmic serpent, is reportedly 1,400 years old.

SheBuysTravel Tip: When encountering Vishnu, it’s good to have already learned about some of the other gods and goddesses of Hinduism and Buddhism. For starters, Brahma is the creator and Shiva is the destroyer.

What is the Main Religion of Nepal?

Nepal is a land of freedom to practice religion. The constitution of 2015 declared just that.

Hinduism dominates with at least 90 percent of the people, and Buddhism claims nine percent. Other religions and ethnic groups embrace Jainism, Sikhism and Islam, plus more. Each has traditions to honor, and experience.

There are no ocean borders for this South Asia country, but Mount Everest in the Himalayas is here, and so are thousands of glorious symbols and stories.

They differ from Christianity.

Should You Take the Kids?

SheBuysTravels like to identify the best places to take kids, and why. That includes around the world.

Many hotels in Nepal offer triple rooms, and even rooms with four beds. While Kathmandu is a bustling city, families often choose Bhaktapur with its slower pace and courtyard garden restaurants.

Home stays or invitations to share with a local family are possible to access. The Nepal Tourism Board has a link to consider taking the kids.

After a breakfast of yak cheese while sitting in a garden of marigolds, I received a blessing from a nine-year-old goddess.

My noontime blessing from a nine-year-old goddess in a Kathmandu neighborhood connected me directly to a 17th century Nepali tradition active today.

If discerned to be so, the child is selected by age four and a ritual places the goddess within her. Thirteen times a year she leaves her home, carried in a palanquin for all to see.

A September Festival of the Chariot celebrates the Kumari tradition.

Back to her family she goes when puberty arrives, considered a goddess for one week longer and then no longer sacred.

Little girls from nine families in Nepal are potential carriers of the Goddess Kumari.

SheBuysTravel Tip: Since ancient and modern coexist with religion in Nepal, side-by-side, interacting easily, leave your Western analysis in your back pocket and live in the moment.

Walking Is Worship Too

Enter the worship by joining the Nepali people walking clockwise, touching the wheel to keep it spinning. That’s what frees the prayer into the universe.

Often the mantra painted or engraved on a prayer wheel is the Sanskrit Oh Mani Padma Me. Some say that a mantra chanted 108 times completes an energy cycle.

Tibetan Buddhists believe saying this mantra invokes the benevolent attention and blessings of Chenrezig, the embodiment of compassion.

Visiting pilgrims are likely to be in this clockwise walk too.

With so many Buddhist and Hindu holy places, Nepal attracts religious groups of travelers making intentional pilgrimages, with a careful, direct focus.

SheBuysTravel Tip: Learn at least the names of some ethnic groups who have lived in the Kathmandu Valley for centuries. That way you can focus more on sights and sounds. Newar is one, and for almost as long, also the Kirat people. The Limbu are in the east, and also in western Bhutan. Gurung is another and lots of Nepalese people have that surname.

In the West, we gaze at paintings and statues in museums and galleries, perhaps discussing the artist and his or her motivations and skills.

In Hindu temples, my guide taught me, people are gazing at images to perfect themselves, to see behind the image to perfect one’s thoughts.

I tried hard but realized I need much more practice. The people of Nepal are far more skilled than I connecting with the energy behind each image.

Hinduism and Buddhism seem to have infused families I observed in temples with the ability to see new gods and goddesses.

Incarnation is a word heard often — glorious stories of new deities. The stories of religion in Nepal are grand. In the art they have lots of hands and arms and heads because they have many functions to perform and such complex personalities.

Sounds Lift With Religion in Nepal

I heard incantations merge as I trekked to altitude 6,000 in the Shivapuri National Park to visit the nunnery on top of a southern slope, overlooking the Kathmandu Valley.

My destination was Nagi Gompa. First I saw prayer flags, and then the girls, lugging baskets of gravel on their backs further up the hill to construct a new building.

Good cheer and gentle sounds enveloped each one. They had already completed a temple, residences, kitchen and rental rooms.

SheBuysTravel Tip: Pack light if you plan to climb this path to rent one of the nunnery rooms. Immersion is possible seeking religion in Nepal!

Travelers head to the cathedrals of Europe to admire the grand architecture of Christianity.

Pilgrims and seekers of faith journeys look into the eyes of Buddha in Nepalese temples. So do local worshipers.

Caring for places of worship is considered an honor and the people of Nepal take a week away from work for just that purpose.

Understanding the Buddha eyes makes the visit more meaningful. As with the prayer flags, colors and numbers matter.

Since the Buddha is reported to have been born in Lumbini, Nepal, knowing his symbols adds extra meaning to walking under their gaze, spinning prayer wheels.

Enter a pagoda but only circle a stupa.

Buddhist masters can be buried in a stupa, whose shape is influenced by Tibetan Buddhism.

Does History Affect Religion in Nepal?

This nation of 30 million people became a republic in 2008, changing from the Hindu kingdom it was founded as in 1768.

Recovering from a horrendous earthquake in 2015 is a story of stamina, and resilience and sustainability. SheBuysTravels pay attention to sustainable travel too. 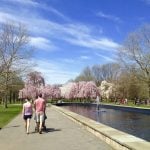