There are plenty of challenges to flying today — from finding a seat on an overbooked plane to weathering the storms of delayed flights and missed connections. Here’s one more: Staying healthy in the germ factories known as airplanes. We should be concerned about it on any flight. Read on for a list of mistakes that are more likely leave you feeling sick after you land.

7 Mistakes that Can Make You Sick

Hundreds of people pass through an airplane each day. Those planes are on the ground for ever shorter periods before taking off again. Who could possibly clean 250 tray tables in 10 minutes? And, let’s face it, people are slobs. It’s easy to see why the germs on an airplane are multiplying even as you fasten your seat belt low and tight across your lap.

With the common cold viruses, influenza viruses, e. coli, and who knows what other infectious diseases waiting to attack your immune system, you’ll want to avoid making these mistakes the next time you fly.

And here’s a real kicker: It’s not just the sick passengers boarding your flight. The germs could have been left there by the dude who sat there last Tuesday. Those microbial buggers have real staying power!

Here are 7 mistakes most flyers make, leaving them more likely to end up sick a few days later.

1. Touching Just About Anything

It’s a challenge to fasten your seat belt without actually touching that metal belt buckle. But it is virtually guaranteed that no one cleans those buckles when there are so many used Kleenexes to pick out of the seatback pocket! They are covered in the germs left behind by everyone else who ever sat in that seat.

How to fix this mistake: Travel with Clorox wipes. I never leave home without them! Germs lurk everywhere in an airplane cabin. I use the sanitizing wipes to wipe down every square inch of any hard surfaces, including the tray table, arm rests and the air vent control. I also wipe the metal seat belt buckle, inside and out.

This just might be the germiest spot of all. Why? Because everyone who read them before you licked their finger before turning the page to add traction on that glossy paper. That’s a mental picture you don’t need, right?

How to fix this mistake: Leave those magazines right there in the seat pocket next to the used Kleenex. You can read the articles later online.

Sometimes you gotta go — just like hundreds of other passengers. Remember that 10 minutes the crew had to clean the plane between flights? There wasn’t much time for cleaning the restrooms either.

How to fix this mistake: The obvious fix is to just hold it. If you can’t, take those Clorox wipes with you and wipe down the faucet, sink, toilet seat and flush handle before you do anything else. If you forget the wipes, pull one of those tiny paper towels out of the dispenser and use it to protect your hands when you touch the door lock and lower the seat. Then pull out more tiny towels to line the seat before you sit down.

When you’re done, wash your hands and dry them on a clean paper towel. (Public health officials will tell anyone who will listen that hand-washing is one of the most important ways to protect yourself from germs.) Use that towel to close the toilet lid, push the lavatory flush button and unlock the door. Then toss the towel as you leave.

OK, that might be difficult if the flight lasts more than two minutes. At least do what you can to avoid breathing in that dry cabin air filled with other people’s germs.

How to fix this mistake: On one flight, the guy who plopped in the middle seat immediately started coughing and sneezing. I debated whether to offer him a Kleenex in the hope he would blow out whatever it was that he kept sucking up his nose (and NOT store the used tissue in the seatback pocket).

Instead, I reached up from my aisle seat and turned the overhead air vent on full blast — pointed in his direction. I figured I couldn’t escape all of the germs, but at least I could blow the worst of them away from me and, I suppose, toward the poor sap sitting in the window seat.

I’ve considered traveling with a face mask. But so far my dignity has won over my desire to stay healthy. Now, I am reconsidering. Face masks are quickly becoming a standard part of a smart travel outfit.

The dry air on an airplane is another issue. It dries out your mucous membranes, which makes it easier for the nasty microbes to attack.

How to fix this mistake: Always travel with a large, refillable water bottle. (I carry this water bottle from Contigo that hangs from my roll-aboard-bag and can easily be operated with one hand.) Fill it at the airport before you board. Then you can drink more than a tiny cupful of water. (If you’re flying a budget carrier, you’ll even pay for that sip of water, just another reason to bring your own!)

I go a step further on long haul flights: I carry a tiny tube of Vaseline and rub a bit inside each nostril. OK, it’s a little gross. But it works to keep my nose from drying out. Besides, I hide behind a tissue when I do it so my fellow passengers don’t have to watch me. That’s good, right?

I always see moms of little ones open the tray table, spread the Cheerios and let the kids have at it. I do my best not to wretch. Flight attendants will tell you that people do everything from smear boogers to change diapers on those tray tables. They’re a breeding ground for germs. And that mom is encouraging her toddler to eat off of it.

How to fix this mistake: Don’t. Just don’t. Or at least use the wipes and hand sanitizer first. Please.

7. Using Your Fingers on That Touch Screen

Everyone else has used their index finger to choose the entertainment on that touch screen and turn up the volume on the arm rest control panel. Yes, that’s the same index finger they licked to turn the page on the in-flight magazines. Or used to pick their nose before that.

How to fix this mistake: BYOD (bring your own device). At least you’ll know the germs on it are your own.

If you must use the entertainment system on the back of the headrest in front of you, don’t use your finger. Use your first knuckle to push those buttons. Then be careful you don’t use that same knuckle to rub your itchy eye, at least until after you use the alcohol-based hand sanitizer.

Dirtiest Spots in the Airport

When the folks from InsuranceQuotes swabbed surfaces at three major airports a few years ago, they found lots of “ewww.” The highest number of viable bacteria and fungal cells per square inch, or colony-forming units (CFU) were found just where you would expect them to be: on the self-serve check-in kiosks. (Again, use your knuckle, not your fingertip and whip out the hand sanitizer the minute you’re checked in and before you touch your face or eyes!)

But they also found plenty of germs on bench armrests and drinking fountain buttons. Thankfully many airports have installed hands-free automatic water fillers for refilling our water bottles. No touching required.

And then there are the filthy bins at security. People put their shoes inside — the shoes that just walked in dog poop. Once, I saw a mom tending to her toddler who was about to be sick. She grabbed a TSA bin to catch the vomit.

You don’t have any choice but to put your stuff inside the bins. Just remember to wipe them down with Clorox wipes after you take them out. And then head straight to the bathroom and wash your hands. For a really long time.

Read More: 20+ Mistakes You Might be Making at the Airport and How to Avoid Them. 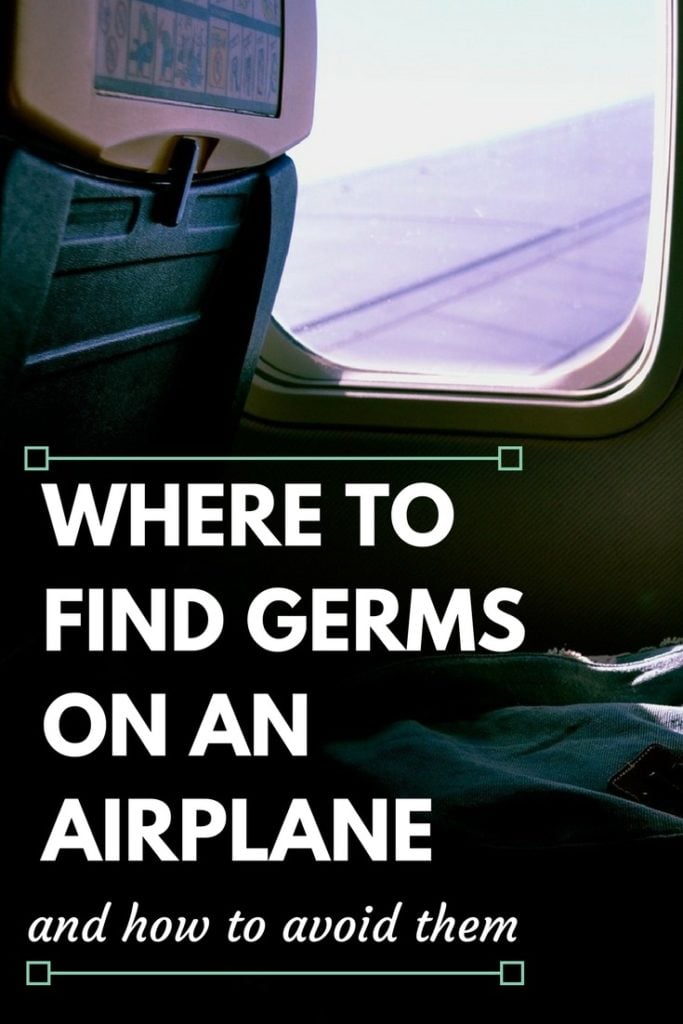