Setting goals and working to achieve them is something responsible adults do. But what if your goal is sampling 4 breweries during the course of a football game? Optimism SheBuysTravel set out to accomplish this objective during a visit to Grand Rapids, Michigan. Some would consider this setting a very low bar, but she felt it was the only proper way to explore a Midwest destination known as Beer City USA.

Grand Rapids, Michigan, self-promotes as Beer City USA. Why? There are more than 40 breweries located in and around this Midwest city, each with a different style and vibe. Arriving in town on a Sunday afternoon, I decided to sample a quartet while watching the NFL’s 4:30 game. Four quarters. Four breweries. What could possibly go wrong?

Planning my excellent adventure was easy. The Experience Grand Rapids website is simple to navigate and has an alphabetized list of all of the breweries and a link to hotel/beer packages. To amp up the fun on your visit, the city’s tourism board designed a Brewsaders campaign. Download the ale trail map, pick up a souvenir passport at a participating brewery, and begin your most excellent adventure. Collect 8 stamps in your passport, mail it back, and you’ll be rewarded with a souvenir t-shirt.

And So the Beer City USA Adventure Begins…

I consulted the map and chose four breweries in close proximity to one another to make my quest as easy as possible. Of the four, Founders Brewing was the farthest from my hotel, so I decided to start there. Fortunately for responsible Brewsaders, Uber is a reliable and inexpensive option in Grand Rapids. So I summoned my ride and started my expedition.

But Founders was closed when I got there.

Founders, one of the top 20 craft breweries in the nation, was holding its employees’ holiday party. Of course, I didn’t realize it was closed until my Uber had pulled away. Instead of recalling it and appearing a fool, I chose to hoof it over to my second destination, B.O.B.’s Brewery. It’s the oldest in downtown Grand Rapids and is housed in the B.O.B., the city’s premiere entertainment venue. Located within the building are music and comedy clubs, restaurants, and the brewery which was…

SheBuysTravel Tip: The alcohol content in craft beers varies widely. The breweries I visited included the percentage in the description of each beer. It helped me make smart drink decisions, but the best choice I made was to not drink and drive. The wait for an Uber averaged 6 minutes and cost approximately $5.50.

At this rate, the football game was going to end before I even got a drink. Dora the Explorer never had this kind of problem. The bouncer at the door of the B.O.B. sensed my sadness and encouraged me to check out The Knickerbocker, a recently opened New Holland brew pub and distillery. I asked if it was walkable; he said it was and pointed me in the right direction. This Brewsader remained undaunted.

The walk was a quick 15-minute jaunt that took me over one of the many bridges that span the city’s Grand River and through an underpass with a colorful mural. Besides beer, Grand Rapids is committed to the arts. The city has two major venues (the Grand Rapids Art Museum and the Frederik Meijer Gardens and Sculpture Park), many galleries, and it hosts ArtPrize, a 2½ week-long annual celebration of the arts.

I arrived at The Knickerbocker a bit sweaty thanks to a 70 degree November afternoon and grabbed a seat at the bar. The brewery is a wide-open space with soaring ceilings and a large beer garden. I ordered a pilsner and a beet salad and proudly slapped down my virgin passport. “I lost mine,” said the bartender. “And I’m sorry. We’re too new to be included in the passport program.”

I dejectedly drained my beer, ate my salad, and gazed at the football game. The Packers were playing the Colts. Prior to arriving, I was told that the Detroit Lions are the #1 team in Grand Rapids. So I felt it was OK to try to generate some pro-Packers sentiment at the bar because I’d picked them in my survivor pool. A loss meant I had no shot at the $25,000 grand prize. But I was promptly shut down, in a very nice way, by the bartender, an ex-Indy resident. He suggested a sports-themed brewery for my next destination, if I was looking for Packers fans, so I summoned another Uber.

Housed in an old firehouse, The Mitten is a multi-storied brew pub, catering to sports fans. I realized that immediately when I stepped through the front door and saw the Detroit Tigers stadium seats in the lobby. There were many families enjoying the late afternoon when I arrived, and several tables had ordered pizza flights, a sampler of four of The Mitten’s specialty pies.

My server was very friendly. She even pointed out the fire pole in the front of the restaurant and told me that the owner had found the footprints of the building’s resident ghost on freshly mopped floors. She recommended the Country Strong I.P.A. and the Fish Dip, a blend of locally caught whitefish, salmon, and trout, blended with Beau Monde seasoning and served with lightly toasted and buttered baguette slices. I finally got my first stamp and a suggestion for stop #3. When I left, it appeared that the Packers were on their way to a loss.

Harmony Brewing opened its Westside location in 2015, renovating a building that once housed a sausage factory and a popular Mexican restaurant. The owners decided on a German Oktoberfest feel, featuring sausages and Bavarian pretzels on the menu and establishing a stein locker. Similar to one I spotted in the Hofbrauhaus in Munich, for the city’s Edelweiss Club.

There was no TV in the bar, so I was spared an update on the game. My mood was dark, so I went that way with my beer selection, choosing the Albius, a vanilla-scented porter. One word describes it…yum. Served alongside a salted pretzel and wholegrain mustard, they made the perfect pair. The only disturbing element was the brewery’s logo. It’s a man’s face with creepy hops for eyes. It looked, to me, like a cross between Jerry Garcia and something evil from True Detective.

It was time for me to head back downtown to get closer to my bed at the Amway Grand Plaza. Founded in 1893 when 6 local breweries merged, Grand Rapids Brewing was my final stop for the night. I settled into a cozy corner location near a glum Packers fan; they’d just lost the game.

My server sat down, filled me in on the brewery’s history, and told me that the Silver Foam lager I was drinking was the company’s first brew and is still produced using the original recipe. A heaping plate of savory mac and cheese made me feel slightly better about losing my football pool, but only slightly.

I ended the night with a slight buzz, a full belly, and 3 stamps in my Brewsaders passport. Not bad for a night’s work. But if I want that souvenir t-shirt, I’ll have to play Carmen Sandiego again and book a return trip to Beer City USA.

SheBuysTravel Tip: The downtown cluster of breweries I originally intended to visit were Founders, B.O.B.’s Brewery, Grand Rapids Brewing, and HopCat. They’re within walking distance of one another in the heart of downtown and make for an easy way to sample the craft beer scene in Grand Rapids. 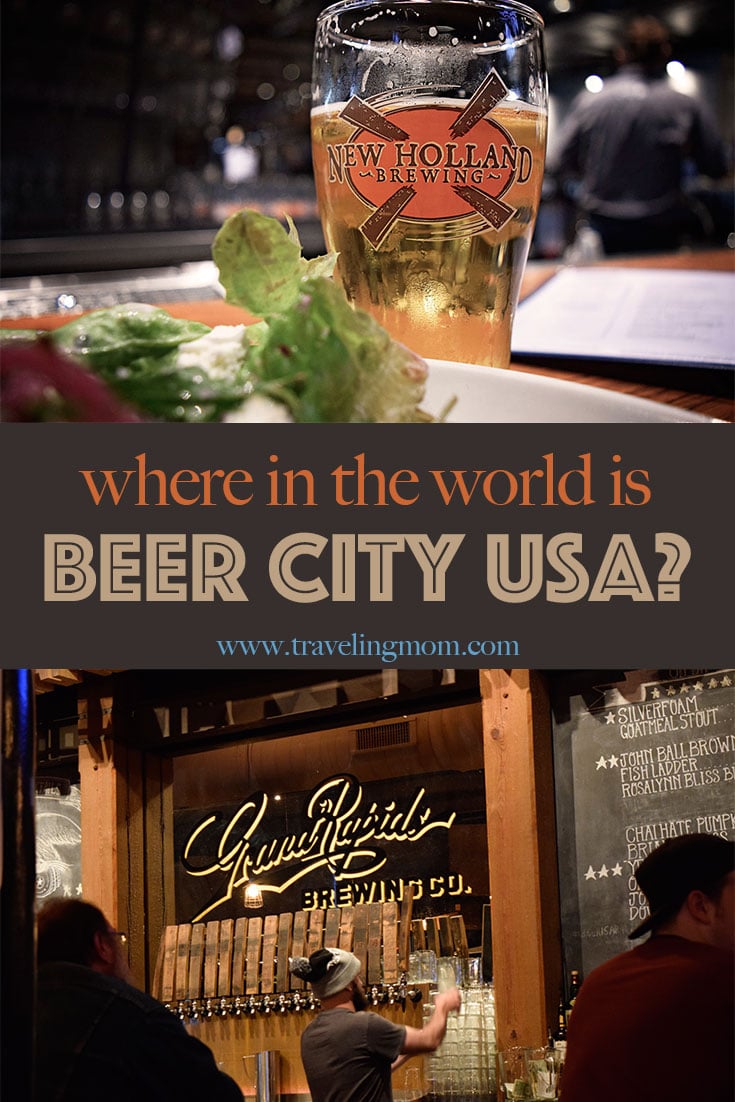