It’s our parental obligation to help our children learn to fly on their own in life. So why not take it literally? At least that’s what Adventure SheBuysTravel Fran Capo, the World’s Fastest Talking Woman, thought when she gave her son the most amazing gift for his 27th birthday.

Learn to Fly the Friendly Skies

Years ago when I worked at WBLS FM radio, I thought it would be cool to be a weather and traffic girl. Not because I really wanted to know when it was going to rain, but mainly because I wanted to fly around New York in a helicopter. Instead, I wound up doing my reporting from the ground as a sultry character, June East (Mae West’s long lost sister) and took Helicopter flying lessons as a backup.

I remember requesting that my first lesson be done without the doors of the helicopter being on (which is an option in nice weather.) I loved the experience of looking out the transparent bubble windshield that gives you visibility for miles around, and the fact that you don’t need a long runway to take off. In fact you don’t need a runway at all! And that you can fly so low to the ground you can smell the flowers or scare an annoying squirrel.

Of course one of my other reasons was because I thought if I ever needed to get away from kidnapers in a hurry and there just happened to be a helicopter around with the key in the ignition, I could make a quick, James Bond type of escape darting in and out of buildings and under bridges. (Yes I have a vivid imagination. But, hey, you never know!)

Teaching My Son to Fly

Fast forward to my son, Spencer’s 27th birthday. I thought, “It’s my parental obligation to teach my son how to fly on his own in life…so why not take it literally.”

With that in mind I found an outfit at Republic Airport in Farmingdale, Long Island, called, “Global Aviation.” The company flies planes, BUT it is affiliated with a sister outfit called, “Flying Helicopters Made Easy.” Perfect! So I decided to surprise Spencer with this as a gift.

We drove up to the Atlantic building and Spencer smiled.

“OK, Mom. What adventure are we doing now?”

“You, my dear, are going to learn how to fly a helicopter compliments of your mother!”

His eyes lit up, and he had a huge grin on his face, “Wow, this is awesome.”

After some needed paperwork (valid ID proving you are over 18 and a US citizen, signing of release forms, and a weigh-in to make sure you don’t weigh more than 250 pounds or there is no flight) we followed the guy out to the field.

Spencer casually mentions to me that he was both excited and a tad nervous because the winds were somewhat high. I just smiled, “Adds to the adventure!”

A lean-confident pilot by the name of Stephan greeted us. With a firm handshake, he began the lesson, which was a combination of 90 minutes of ground training and flying session. I acted as videotographer.

Stephan explained that the lightweight helicopter, the Robinson R22, which Spencer was about to fly, was the hardest to fly, but the best to learn in. (Spencer and I just exchanged glances.) Then Stephan explained in easy-to-understand language how the aircraft worked, the principles behind it, about the gears and explained the maneuvers they would be doing in just a few short minutes so that they actually would fly the craft and not crash into the ground.

The main thing he pointed out was that even with zero speed forward, and whether the engine is operating or not, you can still land a helicopter safely. (I believe at that moment I heard an exhale from my son.)

After the ground training, it was time to put the new-found knowledge to the test. At that point, I was escorted back to an observation area.

The two began their final pre-flight check of the helicopter.  It was now the moment of truth, time for takeoff.

The Go-Pro camera inside the plane (you can bring your own, or you can rent one of theirs) recorded the flight. I stood there beaming like a proud mom as they ascended into the air and zoomed away. Later, I found out they landed on a tiny little Island, practiced lifts, and turns, and then flew back.

Because Spencer had a good hand with the gears, he flew 95% of the time.  He later admitted he had white knuckled the stick for the first few minutes. After seeing that Stephan’s hand was near the gears (just in in case Spencer decided to pull one of his mom’s James Bond type moves, or if he did something by accident) he relaxed. Stephan eventually felt comfortable enough take his hand away completely.  (Check the video closely and you will see).

As they were coming in for the landing, the owner, Yaron, brought me to the copter (after the propeller stopped of course) and I went up to record Spencer’s reaction. His wide Cheshire cat grin, said it all. Stephan was a fantastic teacher, and Spencer was hooked. 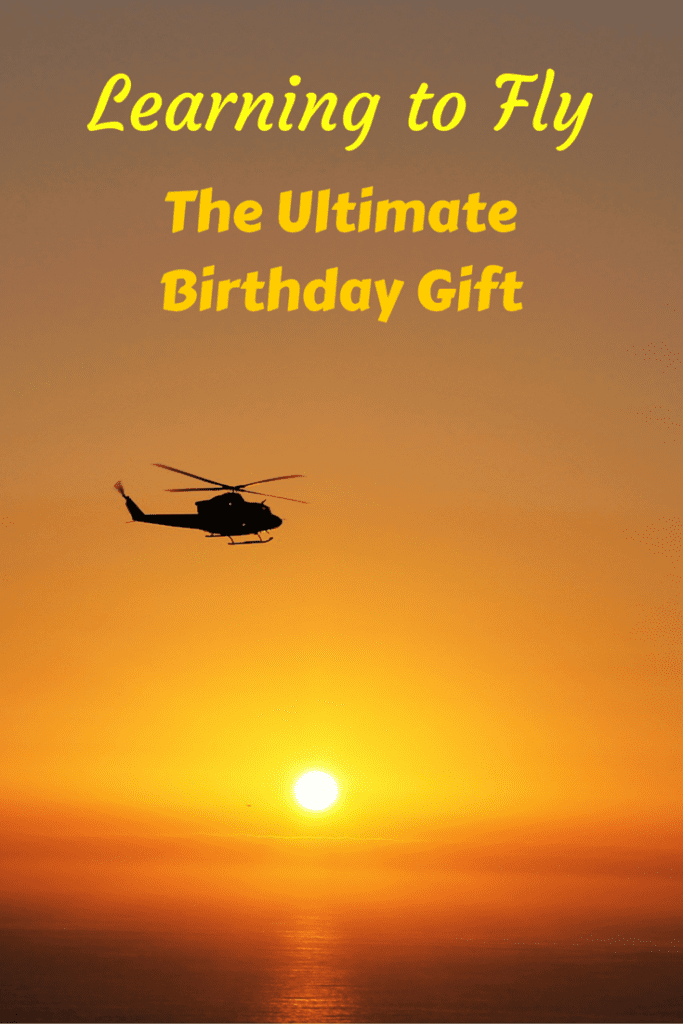 He was given a pilot logbook, and his very first flight was recorded forever.

Another successful birthday present had landed and now a new option in life has opened up as he ponders how to get the rest of the money to continue his training on one of the most versatile vehicles in the world.

Fly high, my son – to infinity and beyond.

For details on other helicopter flying lessons, you can check out chapter 19 of my book, “Adrenaline Adventures: Dream It, Read It, Do It.”

If you prefer to be less adventurous and let someone else do the flying, check out these helicopter tours of Niagara Falls and Chicago.