Technology continues to speed ahead, but there’s still an allure to wild west history and stories. North Platte, Nebraska played a big role in the westward movement when horses and trains ruled the roads. In fact, the Great Platte River Road was the main route followed by those heading west. Today, visitors can drive by vast fields of prairies and visit the world’s largest railway yard. Buffalo Bill and his Wild West Shows are still a big draw in these parts. Los Angeles SheBuysTravel has the scoop on Old West family fun in Western and Central Nebraska.

Driving through North Platte and the Sandhills region of Central and Western Nebraska, I could imagine old west pioneers. Many followed the Oregon Trail, Mormon Trail, and California Gold Rush Trail. Others followed the Pony Express Trail. Then came the first Transcontinental Railroad, and the Lincoln Highway. They all followed the Great Platte River Road through Nebraska.

In May, we traveled on nearly empty roads by vast fields of mixed-grass prairies dotted with cattle ranches.  In between are small towns with mom and pop shops, and historical attractions depicting stories of the wild west, the evolution of transportation and Nebraska’s favorite legend, William “Buffalo Bill” Cody. Historical sites about Buffalo Bill abound.

On our trip, we explored old west attractions. We also enjoyed a couple of outdoor activities unique to Nebraska. These included floating in a cattle tank and hiking through hilly cow pastures. Read on to explore and experience Old West family fun in Nebraska.

I had no idea Bailey Yard existed, yet it’s the world’s largest switch yard. It’s where trains are taken apart, cars and locomotives serviced and repaired, reassembled and sent out again. Operated by the Union Pacific Railroad, an average of 139 trains and 14,000 cars pass through every day. We rode an elevator to the Golden Spike Tower’s seventh-floor observation deck for sweeping views of the trains. From there you can hear the squeals and creaks of the trains being moved throughout the yard.  The visitor center’s videos and photos tell the fascinating history of trains. Train buffs will go wild over Bailey Yard and the center’s books and train memorabilia.

Tankin’ on the Loop, Mullen, Nebraska 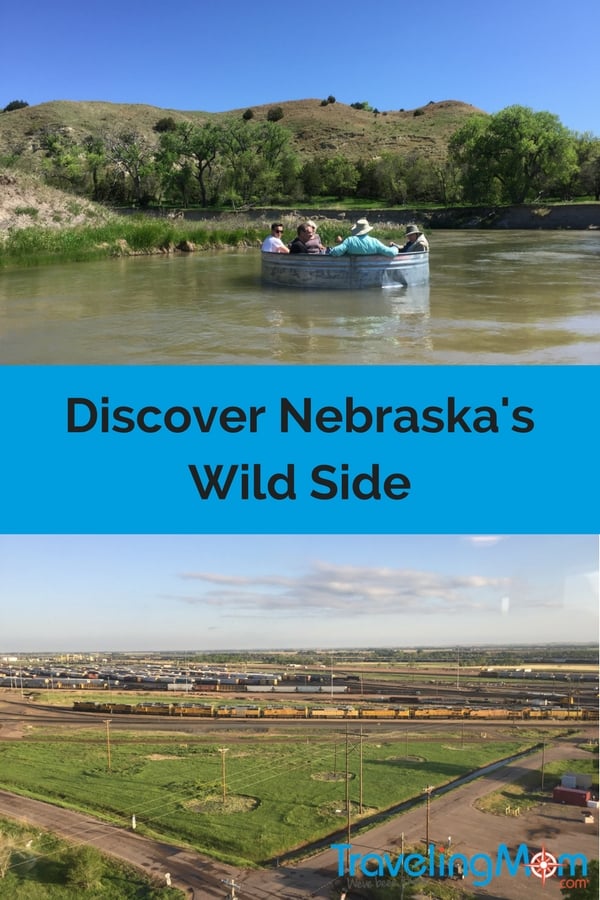 This laid-back float trip was a trip highlight for me. Cattle tanks are re-purposed for float trips on the Middle Loup River. It’s a great way to experience the Sandhills environment. Mitch and Patty Glidden operate the Sandhills Motel and Canoe Rental in Mullen and help you settle into the tanks. Then you’re on your own for the next two to five hours.

Bring a picnic, your favorite drinks, sunscreen, and enjoy a leisurely float on the shallow river. You can pull over at any time to explore or just enjoy the views and sounds of birds and gurgling water.  If you get stuck on a sandbar, use your paddle to push away.

Built in 1854 along the Oregon Trail, the Pony Express Station served several purposes over the years. The small log building was a fur trading post and Pony Express Station (until replaced by the telegraph). It was also the Overland Trail Stage Depot and a bunk house. Now it contains exhibits with weapons, clothing, saddles, mail bags, photos and other western artifacts.

The structure is located in a grassy park with a playground. Across the street is the Gothenburg Historical Museum. The one-room museum paints a nice portrait of the town’s Swedish settlers. Exhibits include antique toys, medical equipment, typewriters, household items, and other items, The people in this town of 3,700 are super friendly, and enjoy talking about their Swedish ancestors.

Had it not rained, I would have had an opportunity to ride a mountain bike on trails that crisscross over 1,200 acres of hills and canyons. Our guide Jeff Caldwell, owner of Cycle Sport Bike Shop, gave us a tour via jeep. We also hiked a bit for better views of trails with names like Wicked Ridge.

The scenic area, located between Gothenburg and North Platte, is owned by attorney and avid cyclist Steve Potter. The trails are open to the public. Caldwell and a dedicated group of local cyclists carve trails for beginners, intermediate and expert riders. Caldwell showed us the onsite campgrounds and outlined his plans for future music festivals.

We were standing in front of Buffalo Bill’s ranch house when suddenly a man on horseback came galloping up. As he shoots his gun in the air, he demands the whereabouts of Buffalo Bill. That was the beginning of a lively reenactment of the life of Buffalo Bill. Our guides wore period clothing and regaled us with stories of William Cody,  best known as Buffalo Bill. Nebraska’s famous rancher was a buffalo hunter, stagecoach driver and Indian scout for the U.S. Army. He was best known for his Wild West Shows.

We took a guided tour of the ranch (which he named Scout’s Rest) where he, wife Louisa, and their four children lived in the late 1800s.  Most of the tour focused on his personal life. We also visited the restored barn, housing his weapons, wagons, and other memorabilia from his shows. While in the barn, we met Buffalo Bill and watched a humorous exchange between him and Louisa.

North Platte’s largest park combines family fun and history. Here you can buy an ice cream cone, ride a carousel, and visit a small train museum. The museum anchors the Union Pacific Challenger 3900 steam locomotive, one of the two largest ever built in the world. The park surrounds a pond, which was the site of Buffalo Bill’s Old Glory Blowout, his original Wild West show. The Wild West Memorial at the entrance includes a life-size statue of Buffalo Bill.  The flags represent all the states and countries where Buffalo Bill’s Wild West Show appeared.

Around the bend is this small, interesting museum showcasing historical exhibits of Nebraska. The North Platte Canteen exhibit consists of photos, newspaper clippings, clothing and other items from the WWII period.

We learned how local women prepared meals for soldiers passing through the area. A typical meal consisted of egg salad sandwiches, fried chicken, hard-boiled eggs, pickles, fresh fruit, cookies, doughnuts, and pie. Many of the women were just teenagers. They would include their name and phone number in little packages of popcorn balls that they gave to soldiers. It was the beginning of many romances.

Denver mom Megan Lee was visiting Nebraska with her three children. Her 10-year-old son Alexander was studying about Buffalo Bill in school. “We thought it would be fun to stop here,” says Lee.

Nebraska has a bunch of free things for families to see and do.