Disclosure: All or part of this trip was provided free or at a reduced cost for review purposes, but the opinions are solely that of the writer. A TravelingMom cannot be bought. 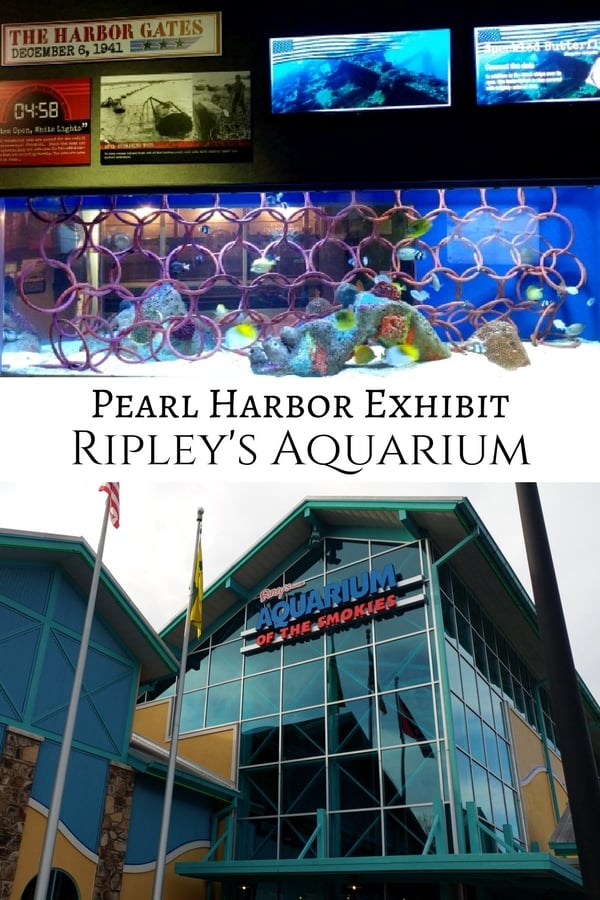 It’s one of the first things you see as you drive into downtown Gatlinburg. I knew about Ripley’s Aquarium long before we arrived and it was high on the list of attractions with kids in tow.

The new Pearl Harbor exhibit also piqued my husband’s curiosity. That made it a slam dunk visit for the whole family.

How Do I See the Pearl Harbor Exhibit at Ripley’s Aquarium?

Admission to the Pearl Harbor Exhibit inside Ripley’s Aquarium is included in the regular admission ticket price.

The admission price is on the high side. But we felt that we got two attractions in one. Given the kids’ reactions to so many things, the visit was worth the money.

What’s in the Pearl Harbor Exhibit at Ripley’s Aquarium?

The exhibit includes 3 interactive galleries. Music, numerous videos and real radio broadcasts from that time play continuously in each gallery. A timeline of events before and after the attack are is posted throughout the exhibit.

Several aquariums displays help tell the story. The Harbor Gates aquarium is symbolic of the submarine nets used to keep enemy subs out of the harbor.

The nets were slow to operate. So the gates were left open for two U.S. ships due to arrive in the harbor shortly before the attacks.

A statue of Franklin Delano Roosevelt stands surrounded by war-time headlines, quotes, and a monitor that plays his speeches.

Is the Pearl Harbor Exhibit a Permanent Part of Ripley’s Aquarium?

It was created near the 75th anniversary of the Pearl Harbor attack in December 2016, but it is not a permanent exhibit. The Pearl Harbor display will close at the end of 2017.

Why is Ripley’s Aquarium a Good Location for the Pearl Harbor Exhibit?

The Pearl Harbor exhibit is a dream realized by Ripley’s Regional Manager Ryan DeSear. It was DeSear’s desire to provide the younger generation with the opportunity to learn about Pearl Harbor in an interactive way.

The exhibit also educates visitors about the changes to the aquatic habitat surrounding the sunken vessels, as well as the animals that came into the area afterwards.

What Are the Kid Favorites at the Pearl Harbor Exhibit?

Kids can look into a full-sized periscope to see ships and move an interactive map with their hands. A sign invites kids to climb inside the USS Arizona. They can sound the alarms and turn the wheels while real water leaks inside. It is a popular place to be for kids.

A diving suit is also a part of the exhibit, which makes for a fun photo opportunity.

Several cutouts are also available for photos. I’m a fan of Rosie the Riveter and the little one likes soldiers, so it worked out.

Benches decorated like American flags invite you to sit and watch educational videos and read names on the Memorial Wall.

I did a nice, long walk-through video to capture everything mentioned, check it out.

What are the Other Highlights at Ripley’s Aquarium?

We easily spent a few hours at Ripley’s Aquarium as there is plenty to see before and after the Pearl Harbor exhibit. Some of our favorites included touching the top of a
jelly fish, observing sharks swim around the Glass Bottom Boat, and of course the shark tunnel was a big hit.

A slow-moving conveyor belt moves through the tunnel. So we stood and watched the sharks swim above. I have had a lifetime fear of sharks thanks to the Jaws movies. So it was fun to get goosebumps and take the long ride down the shark tunnel. The jellyfish tanks are beautifully lit. I could watch them all day! Here is a video of the jelly fish and shark tunnel with spooky mood music.

The penguin exhibit is fun too. There is a short tunnel that kids can crawl up and poke their heads into the lookout point. It’s right in the middle of the penguins.

We were also able to touch stingrays. But we were asked to take our hands out of the water if baby sharks happened to swim into the area. That did actually happen a few times as the kids shrieked with joy.

I give Ripley’s Aquarium a big thumbs up for both somber and celebratory moments. That is big stuff in my world. 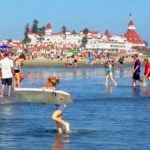