When your daughter returns home from college, there’s a period of readjustment. One way to ease the transition is to spend some quality time together. Where’s the best destination for a mother daughter trip? Consider Montauk, the easternmost village in New York’s Hamptons. It’s a sleepy coastal village where people fish, surf, veg. Repeat the cycle until completely relaxed.

Montauk is where I took my daughter to celebrate her successful sophomore year. We booked our getaway for Sunday – Tuesday to avoid traffic and rowdy weekenders and to take advantage of lower mid-week room rates.  We got a chance to catch up with one another before I started hollering at her about leaving dirty dishes in the sink at home!

The highlight of our trip, and why I recommend Montauk as the best destination for a mother daughter trip, was a two-hour sailing lesson on Block Island Sound. I booked it with Sail Montauk, operated by business and life partners, Ali and Darius. The weather was perfect for our lesson with good winds and just the right amount of sun. Darius motored us out of the Montauk harbor and then gave us an intro to basic sailing techniques.

He and my daughter hit if off immediately; they’re both huge “Survivor” fans. We each tried our hand at steering the boat by controlling the tiller and I attempted several tacks. That’s sailing talk for U-turn. We were both scared and excited. It was so much fun to learn something new together and I’m hoping we can take a few more lessons at home before she heads back to school in the fall.

Gatsby and the Gold Coast

A good road trip requires detours. In planning our Long Island getaway, my daughter and I considered several sightseeing options. Despite living in the Hudson River Valley forever, we’ve never explored this part of New York.

Since we’re both huge Leonardo DiCaprio fans, we decided to visit one of the elegant homes that inspired his version of “The Great Gatsby.” Wealthy industrialists erected over 500 mansions after the turn of the 20th century, earning the North Shore of Long Island its nickname, the Gold Coast. Many remain and several are open to the public.

We opted for a visit to the Old Westbury Gardens. Stepping on the grounds and imagining decadent Gilded Age parties was a fun exercise in make-believe. Who wouldn’t want their own croquet court? The estate is meticulously maintained. Picture a meandering path called “The Lilac Walk” and then think about the fragrance. It was heaven. I was awestruck by the sun porch; its massive glass walls were designed to be lowered into the basement. Put me in a silk gown, drape me on a chintz sofa, and surround me with cut hydrangeas. I’d be a happy, happy kept woman

Long Island is also home to a number of wineries. So we made another pit stop in Sagaponack at the Wölffer Estate, one of only three vineyards in the Hamptons. I was familiar with it because I’d visited the Owera Vineyards in Cazenovia, New York, and the owner had mentioned that they’d used Wölffer for design inspiration.

The tasting room was a popular destination for families with young children, surprisingly, on a windy Sunday afternoon, so my daughter didn’t feel weird as a non-drinker, nibbling on cheese and crackers. I chose a 4-wine tasting for $15. Unfortunately, none of the wines made my palate sing; fortunately, it meant we left with my wallet still intact.

The tasting room was lovely and situated with a terrific view of the vineyards. It must be magnificent in late summer when the vines are laden with ripe fruit.

As we approached Montauk, I startled my dozing teenager by swerving sharply right, tossing up a gravel plume, and screaming “The Lobster Roll!!!” Montauk landed on my travel radar via Showtime’s “The Affair.” Season 1 was set primarily in the town. The Lobster Roll is the restaurant where Noah Solloway meets his mistress Alison.

I was a bit underwhelmed as we approached our hotel, the Montauk Beach House. It’s set off a side street populated by establishments with pasts much brighter than their presents. But, opening the lobby’s glass door, we entered a chic little lounge and received a warm welcome from the hotel’s French manager. He led us out into the entertainment area that includes a bar, grill, and plenty of bed-sized, umbrella-shaded, loungers surrounding two heated pools. 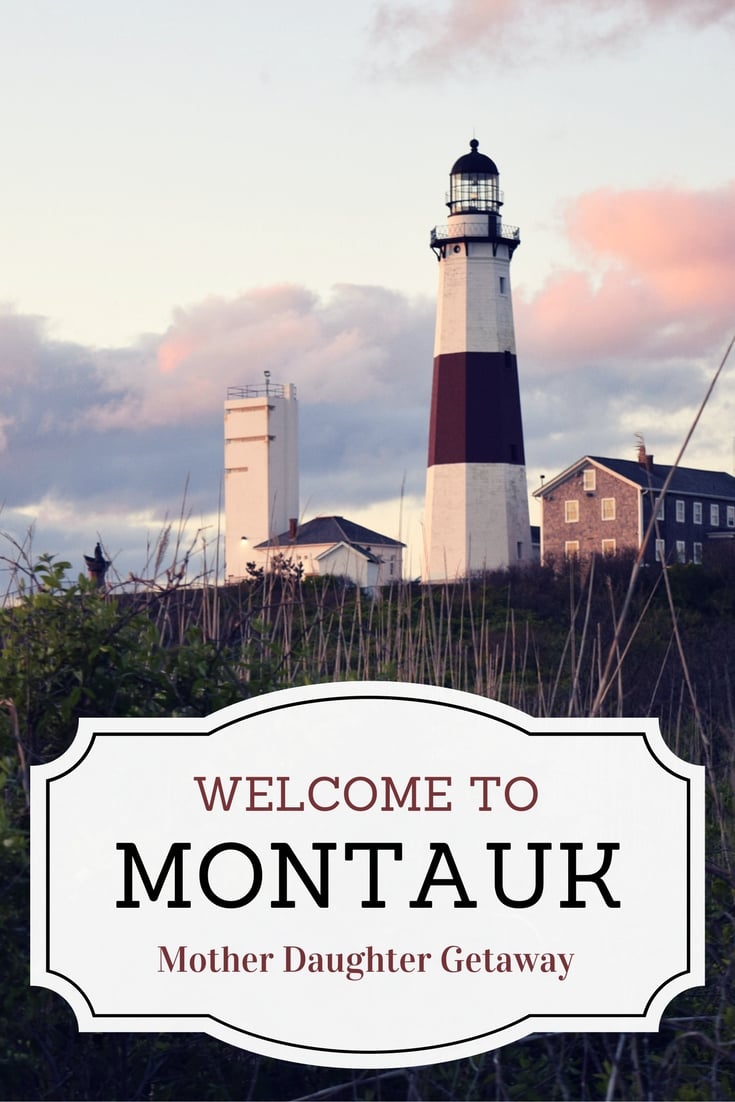 The place has a funky, retro feel. Until a massive renovation in 2012 it was a seedy efficiency motel known as the Ronjo. Its primary attraction was a giant tiki statue out front. The new owners kept the tiki, painted it bronze, and pitched everything else.

Our Moonlight Suite had dark grey walls, furniture from Restoration Hardware, including two queen-sized beds, and a giant, clawfoot tub. In the room. Sounds weird, but it works. The best way for me to describe the style is decadent practicality.

The staff was friendly, engaging in pleasant conversation with the guests as we sampled the complimentary continental breakfast. We talked a lot about the weather, which had been unseasonably cold.

Although we were initially put off by the downtown location, it was great for walking to several good restaurants, shops, and the beach. We caught a magnificent sunset at Harvest, an upscale Italian restaurant on Fort Pond and tried the great fish tacos at The Gig Shack. And, when we needed a bigger breakfast, Mr. John’s Pancake House had a line out the door and was worth the wait.

For shopping, you can hand over all of your money to the ladies in Calypso St. Barth and walk away with the chicest summer styles. Or, toddle round the corner and visit Land Shark Unlimited for spirit jerseys and hoodies with their fun Montauk whale logo. For gardeners, be sure to wander around Fort Pond Native Plants, a family-owned nursery offering, you guessed it, native plants.

What’s on the activities list for a mother-daughter getaway? There was the obligatory spa mani-pedis. We also schlepped to the top of the iconic Montauk lighthouse and explored its museum, dedicated to the area’s nautical history.

I actually went out to the lighthouse twice in the same day. Based on earlier advice I’d received from professional photographer Avery Meyers, I got up predawn to take some people-free photos of the popular tourist attraction, bathed in soft pink light. It was a tremendous way to start the day and let my daughter sleep in.  And driving out there I found another spot from “The Affair” – the Deep Hollow Ranch.

We were sad when our sailing lesson ended because it marked the end of our getaway. Darius had filled us in on so much weird Montauk history that we wished we had another day to explore and learn more about the secrets of Plum Island and the myth of the Montauk Monster.

We talked about returning so I can sample some more lobster rolls. Right now, Gosman’s is #1 but I need to log a few more before I give it the gold. Actually, I was the only one talking because my daughter had fallen asleep, just like she used to when she was a toddler strapped in her car seat.  I lowered the radio volume, smiled, and headed for home.

If you could go anywhere, where would you take your Mom?