The “Oculus” is the core of the new World Trade Center transportation center in NYC. Completed in 2016, the hub serves a quarter of a million commuters daily and millions of visitors annually. But this station stop is more than just a spot for those traveling through. It’s designed by acclaimed Spanish architect Santiago Calatrava. While it took more than 12 years to create and was criticized as a symbol of excess, the Oculus at Ground Zero is now a site to be seen and photographed.

It took more than 12 years to rebuild the World Trade Center transportation hub, which was destroyed when terrorists attacked the United States on September 11, 2001. But the new train station emerged as an atypical architectural monument and transit hub. It is a centerpiece of light, art, beauty and hope.

While heading to downtown New York City and visiting the 9/11 Memorial & Museum, don’t miss this spot. It’s free to visit. It offers a refuge from the cold or hot weather for tourists and New Yorkers alike.

The Oculus from the Outside

As award-winning Spanish architect Santiago Calatrava created this spot, there was ample criticism. Complaints included overspending of government funds, cost overruns and architectural “excess.” It was designed to look like a dove in flight. Now finished, some have compared it to animal skeletons or claws.

So much in New York is dark and dirty. This space is white and clean. While there, I had the sensation of being inside the belly of a whale, with many ribs above and around me. Or perhaps you’ll feel as if you’re resting under the wings of a giant, ancient bird. As I looked around I had odd flashbacks of certain scenes from the film Logan’s Run.

It feels like a futuristic Grand Central Terminal. (Grand Central is also worth a visit another time if you haven’t seen it!) But there’s no beautiful mural across the expansive ceiling. Instead, there’s a large, open space full of light. There is nothing traditional about this as a transportation center. No obvious ticket machines and no multi-faced clock in the center like Grand Central. Computer screens are scattered about with information. And there are large screens flashing ads of modern design and art exhibits.

The Oculus on the Inside

High-end retail shops and boutiques offer plenty of shopping options. The Apple Store feels very natural in this spot. There are quite a few international chain stores, including Reiss and Cos. Designer shops, including kate spade and Dior, offer items from clothing to bags to watches and electronics. Even the “kiosks” found on the main hall floor are modern and artistic. Sennheiser Audio encourages you to listen to its headphones while standing within an exhibit style you might find at MOMA.

A Photo Op in the World Trade Center

Standing on platforms on either end of the main hall is selfie-central. You’ll want to document your time there with friends and family. You’ll feel a part of the space.  As a result, plenty of people will be waiting to snap themselves on the edge of platforms overlooking the main hall. You’ll hear any different languages as cameras snap away. It’s clear international tourists are catching on to this spot.

As we walked around the building, we saw a number of photographers in the middle of photo shoots. With the natural light, a ballerina dressed in black stood out in stark comparison. A lingerie model strutted across the floor while cameras snapped. A traveling choir posed for a CD cover photo.

This glass and steel structure was made with more than 12,500 tons of specially designed structural steel. (That’s equal to the mass of 800 average sized school buses, according to The Port Authority of NY/NJ.)

The longest rafter or “wing” of the Oculus is about 200 feet. It occupies approximately 800,000 square feet in total. It has more than 78,000 square feet of multi-level retail shops and dining. The mezzanine roof is supported by what’s called the “Vierendeel Truss,” which weighs more than 270 tons. As big as it seems, it’s the city’s third-largest transportation spot.

From the inside of this terminal, you can easily access multiple spots without leaving the building. Stand in line inside for One World Observatory. Use the internal entrance to the Winter Garden at Brookfield Place. Walk through the mall and exit the other side to get a view of the Hudson River and New Jersey. Or grab a bite at Eataly’s downtown location.

Connect to World Trade Center Towers 1,2,3 and 4 as well. And you’re just a short walk from the World Trade Center Memorial and Museum. According to Port Authority officials, this spot offers the “most integrated network of underground pedestrian connections” in the city. 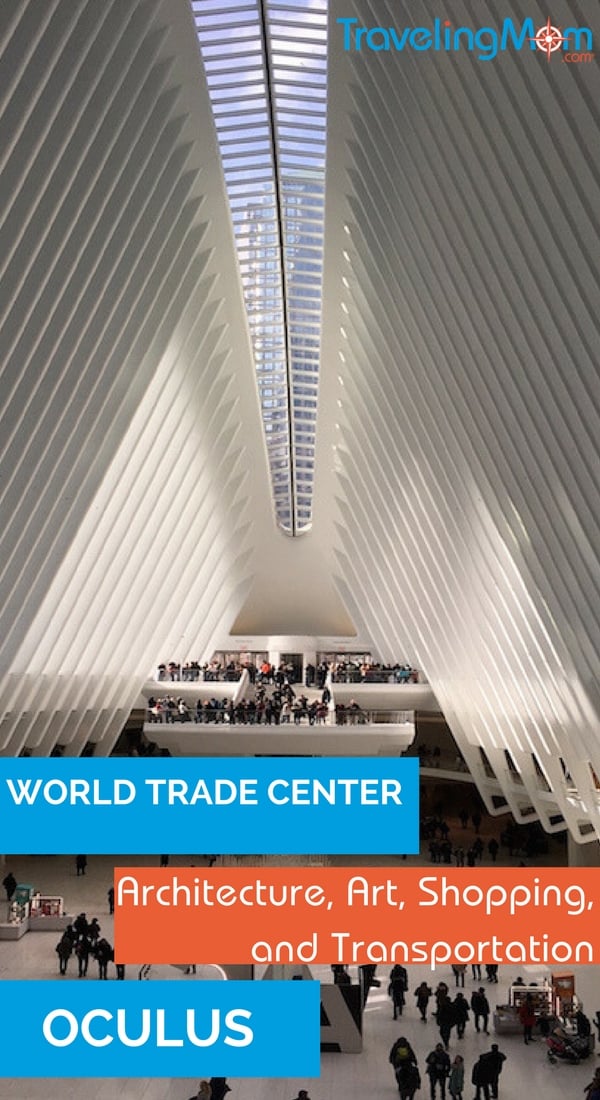