A new aquarium opened in the Cincinnati area in 1999, with much fanfare. Wayfinding SheBuysTravel was underwhelmed with it at first, but has since had the chance to compare it with other aquariums around the US. When planning a trip to Chicago, you may be wondering, “Is a visit to the Shedd Aquarium worth it?” The answer may depend on where you’re from, and your experience will likely be affected by your expectations. Let us try to help break down a visit to Shedd Aquarium.

Is a visit to the Shedd Aquarium in Chicago worth it?

My husband and I have had an on-again-off-again relationship with our local aquarium. The Newport Aquarium boasts the first Shark Rays in North America, the largest jellyfish gallery in the midwest, the largest alligator outside of Florida, and is quite cool despite being less famous than some others in the region.

It consistently ranks among the top aquariums by many reputable sources, including the Travel Channel, Trip Advisor, and Parents Magazine. I remember visiting the National Aquarium in Baltimore, the Ripley’s Aquarium in Tennessee, and the Aquarium of the Pacific in California and thinking, “These are fun, but they actually aren’t any cooler than ours.”  This was (almost) never a knock on those aquariums, rather a new appreciation for what is in our backyard.
It had been years, though, since any of us had been to the world-famous Shedd Aquarium in Chicago. So on a recent trip to the Windy City, we added it to our list of must-see places. I enjoyed it when I was younger, and I knew it was one of the largest and oldest aquariums worldwide. It should be great, right?!
Well, kind of. I mean, it is pretty neat. If you’re in the city and have some free time, you likely won’t regret visiting the Shedd Aquarium – but I don’t think I’d make a special trip to visit.

Before this trip, we had heard horror stories of the line we might encounter to enter the aquarium; this was easily avoided by buying our tickets in advance. When we got there early there was only a small line, but we were glad to have skipped even that.

For the first few hours of our visit, we were only mildly impressed. Don’t get me wrong, there is a lot to see. On the main floor, you can explore exhibits about the Amazon River, Caribbean Sea, and the Great Lakes. Our favorite general exhibit was less about the animals we got to see, and more about a display which described the changing environment of the Amazon River habitat, as the water levels change with time and location.

The most common ticket sold (the Shedd Pass) – is more than $30, and only adds a few more exhibits. The one thing that always bothered us about the Newport Aquarium was the $20 cost, which seemed steep. As it turns out, many of the basic attractions included in the General Admission and Shedd passes are actually somewhat more run down than those at I’ve seen at other aquariums, and those kind of exhibits are all included in our local, lower-priced admission ticket.

The experience gets better with the purchase of the highest priced Total Experience Pass. With this, you get the general exhibits, plus your choice of a special traveling exhibit, a show, or the Stingray Touch experience.  In my opinion, the additional exhibits should be included with the lower priced passes. They are almost identical to those – including “touch an animal” exhibits – at every other aquarium we have visited. In many cases, these exhibits don’t require an extra fee.

Traveling Mom ticket tips: At this time, the General Admission pass is listed as an option for Illinois Residents only (with valid ID). Be sure to check the aquarium’s tickets page or call for more details before you visit. Also, the best prices are going to be for passes purchased at least a day in advance. If you would like to visit on the same day you purchase admission, you will either have to wait in line at the aquarium or incur a $15 “express pass” fee for same-day tickets purchased online.

The aquatic shows, included with the Total Experience Pass and the Chicago Citypass, are where our review gets a bit murky.

The show we saw, “Fantasea: Let the Journey Begin”, made our visit worthwhile. Our whole group was enthralled with the dolphins and beluga whales showing off their tricks. The Oceanarium was a lovely venue, and the show was really well done.

We saw the show prior to taking the kids to Sea World, so we didn’t have that as a comparison; at that time, the Shedd aquatic shows were the only things I had seen that came close to sharing the beauty and intelligence of these big, lovely creatures.

So, yes or no? Is Chicago Shedd Aquarium worth it? 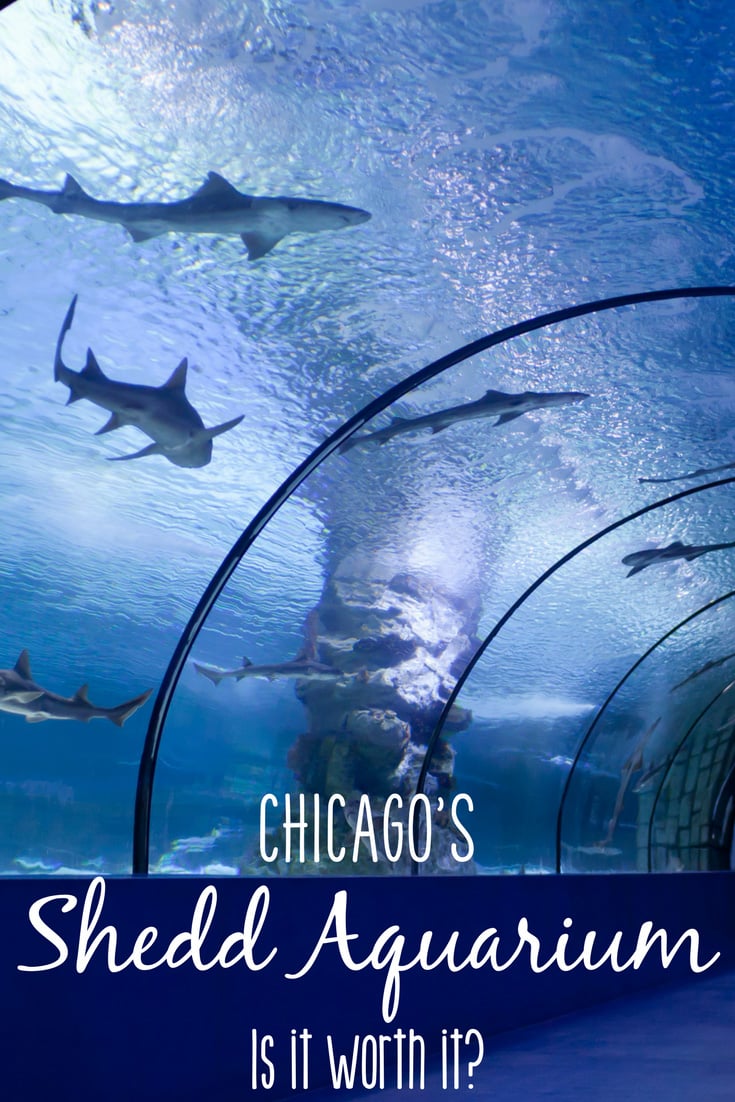 In most cases, I would suggest you save your money and do one of the other great things Chicago offers. We have been to so many similar aquariums, often with better-kept exhibits, for a lower price.
That said, it may be a good fit for your family if you’re going to splurge for the shows, or if you just want a very quick, enjoyable visit to the general exhibits. If you are planning to see the show, be sure to get in line a while before the posted time – especially for the final shows of the day.
The Shedd Aquarium is a popular destination, and has been for decades; I don’t think you’ll regret visiting if you do decide to give it a shot. Just be mindful of what is included in your admission, and what you may (or may not) see that would differentiate it from an attraction that may be closer to you or more affordable.
Besides – if you do decide to splurge there, Chicago has you covered with plenty of free attractions, too.